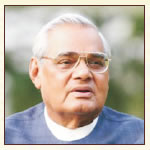 Of the many institutions that were born in the ferment of India's struggle for Independence, the Bharatiya Vidya Bhavan occupies a unique place for its vision, activities and its continuing contribution to the realisation of the fundamental good of the Freedom Movement.
The Bhavan has also been unique in attracting men and women of exceptional calibre and character decade after decade since its inception in 1938. This speaks for the power of the blessings of Mahatma Gandhi which it had received at its birth and also for the farsightedness of its founder, the late Dr. K.M. Munshi.
It is only instruments like the Bharatiya Vidya Bhavan which can guide the society along the desired path by radiating the light and wisdom of our ancient and modern seers.
There can be no two opinions that the Bhavan has been in the forefront of transmitting the knowledge and wisdom of the great minds of India both within the country and through its branches abroad. In doing so, the Bhavan has truly lived up to its Rigvedic motto: Aa No Bhadraha Kratavo Yantu Vishwataha: Let Noble Thoughts Come To Us From Every Side.
The Bhavan has blended all the spiritual and intellectual streams of India and the world - and for this, too, it deserves to be heartily commended. I join millions of my countrymen in wishing the very best for the Bharatiya Vidya Bhavan's noble endeavours in the coming decades.

❞
What They Say