Two students of Bhavan's R. K. Sarda Vidya Mandir, Master Harsh Agrawal and Master Anmol Rathi of class XI became the proud recipients of the Pradhan Mantri Bal Shakti Puraskar this year. A medal, a tablet and a cash prize of Rs. 1 Lac were given to each awardee to mark their accomplishment.
Harsh and Anmol were conferred with this esteemed award by Honorable President of India Shri Ramnath Kovind on January 22, 2020 for their earnest dedication on an innovative project named 'Early Detection of Pancreatic Cancer using a low-cost & non-invasive strip-based test along with a Smart Algorithm utilizing Retrospective Data for Risk Assessment'. It is anticipated that the strip they have developed will save thousands of lives from the deadly ailment which otherwise remains undiagnosed or detected at its later stage when the patient has a thin chance of survival. 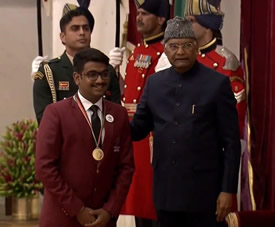 This result was the culmination of tireless efforts made by the kids, support of their parents and the school, equipped with the able guidance of their mentor Mr. Sushil Kumar Pandey, a teacher of Chemical Sciences with Bhavan's R. K. Sarda Vidya Mandir, Raipur. To develop their device, the duo had made rigorous research on the project. 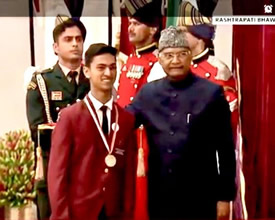 Harsh and Anmol were among those lucky champs who were invited by the Govt. of India for the award ceremony held at the Rashtrapati Bhawan in New Delhi on January 22, 2020. Minister of Women and Child Development, Smriti Irani met the children and congratulated them for their commendable feat. The next day the kids met the Prime Minister Narendra Modi where they spent a good time interacting with him and getting to know him at close quarters.
On 26th January, donning their maroon blazers and medals, along with the team of 49 child prodigies, Harsh and Anmol became a part of the Republic Day parade.

Shri Lalit Surjanji, Convenor of Raipur Kendra passed away on December 2, 2020. He was 74 years old.
An excellent social worker, poet, author and Chief Editor of Deshbandhu, he contributed a lot to the field of literature, education, environment, communal harmony and world peace.
Shri Surjanji will always be remembered for his tireless efforts to establish the Raipur Kendra. His continued support and guidance have helped the Kendra achieve its current position. He played a significant role in promoting Bhavan's culture in Chhattisgarh.
He is survived by his wife and three daughters.
May his soul rest in peace.