Bhavan's Sri Ramakrishna Vidyalaya, Sainikpuri, celebrated its 45th Annual Day on Thursday. Swati Lakra, IPS, Inspector General of Police, Law and Order & I/C Women Safety, Telangana was the chief guest.
The programme presented by about 700 students was appreciated by one and all.

The efforts put forth by the management, principal, staff and students of BSIRKV paid off in the form of four great achievements. All the infrastructural developments done in the school, good academic result and attention given to sports and games rated the school as one of the best schools.
BSIRKV was recognised as no. 1 in India under the Top CBSE Schools - parameter wise for "Co-curricular Education" by 'Education Today'.
'Education Today' is an online education portal with a division of bi-monthly magazine that extensively focuses on the K-12 segment, institutional profiling, school ranking results etc. The second recognition for the school was in the survey conducted by 'Education World' wherein the school has been ranked No. 3 in Secunderabad Co-education schools.
The third accolade was the 2020 Pancharatna Trophy from Bhavan's Dimdima for maximum best contributions to Dimdima between July and December 2020.
Another achievement was when one of the Hindi teachers from Secondary wing, Smt. V. S. R.Seshu stood second out of 200 contestants in an online singing competition 'Kala Mahotsav' conducted by Hands United for Life Long Aid and Human Upliftment Lever Foundation (HULAHUL) registered under Maharashtra Public Trust Act 1950, Mumbai. It is also a remarkable achievement as she is the only contestant from Telangana State.

Bhavan's Sri Ramakrishna Vidyalaya, Sainikpuri, Secunderabad once again rose to fame in sports, as one of its Class 12 students, R Raja Rithvik became a Grandmaster in Chess on September 11, 2021. He has the rare distinction of earning two Grandmaster norms within 20 days.
BSRKV was awarded Swacch certificate by Greater Hyderabad Municipal Corporation, Telangana for maintaining best hygiene during Covid times. 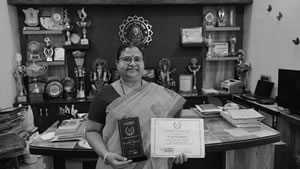 Principal Smt. B. Jyothi Aparna was conferred the C V Raman Education Award for Excellence in Leadership for exemplary leadership in education during Covid times.

Bhavan's Sri Ramakrishna Vidyalaya organised the celebration of 134th Birthday of Sri K. M. Munshiji on December 30, 2021. The members of the Kendra Committee, principals & vice principals of the three institutions in the Kendra and lecturers and teachers attended the function. Twelfth chapter of Bhagavad Gita was chanted by a few students of the school followed by a devotional song and classical dances by primary and secondary students. Vice chairman addressed the gathering and highlighted the vision and the ideals of Dr. Munshiji.