Celebration of 85th Foundation Day of Bharatiya Vidya Bhavan, and Lecture on 'Place of Vedanta Philosophy in Human Life'
by Ms. Sangeeta Rau

Two students from Bhavan’s Gangabux Kanoria Vidyamandir, Shree Chakraborty and Sukrit Nag of Class 10 were nominated for the ‘Choto Chokhe Boro Pujo’ event along with the shortlisted students of other schools. The young team visited pandals on Panchami and Shashti to decide on the Best Puja of Kolkata based on their originality and creativity. They visited the pandals of Dumdum Park and Kestopur area on Panchami.
On Shashti, the whole team, along with Venkatesh Iyer and Rinku Singh of KKR team accompanied by Tollywood actor Rwitobroto Mukherjee, visited the winning pandals for prize distribution.
The event ended with an amazing lunch and gift distribution for the students at Hyatt Regency, Kolkata.

Swachhata Pakhwada is one of the key programmes under the Swachh Bharat Mission. The initiative was started in April 2016 with the objective of highlighting the importance of cleanliness and sanitation among the students of the school.
This year the aim was to make sure that the schools continued to keep their campuses clean and green as a part of the Swachh Bharat Abhiyan. 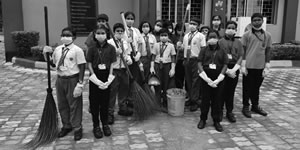 Bhavan’s Gangabux Kanoria Vidymandir, Kolkata has played an instrumental role in engaging the students for the Swachhata Mission. Activities are conducted in the school that involve the students in cleaning the school campus diligently and maintaining personal hygiene at the same time.

Navaratri celebrations started with the arrangement of Bommai Kolu by the teachers on September 30, 2022. The beautiful display of dolls was arranged in the main auditorium. Cultural programmes were conducted every evening from 5:30 pm to 8 pm on puja days (September 30 to October 4). Students of the three schools participated in the programme. Teachers and office staff also took part in the cultural programme. Delicious sweets and savoury snacks were served as prasadam to all the students, parents, participants and guests every day. Pujas were performed every evening for the Bommai Kolu and books were placed for worship by the students.

Annual Gita Recitation Competition is conducted by Thrissur Kendra on Ashtami Rohini day every year.  This year, the competition was held on August 18 at Bhavan’s Kendra office, Thrissur.   More than 200 students from 25 schools all over Kerala, participated in the competition.  Bhavan’s Vidyalaya, Eroor, Kochi won the overall Championship.
Sri. P. Chithran Namboodiripad, Sr. Vice Chairman, Thrissur Kendra inaugurated the contest and distributed prizes to the winners.

For the first time after the pandemic, a gap of two years, the alumni association of Bhavan Vidyalaya Chandigarh, brought back the most awaited event of the year- BOSS Fete 2022.
The annual fete was launched on the campus on October 15, 2022 amidst much fanfare.
The Diwali Carnival had more than 30 stalls with games, entertainment, music and other entertainment for children and guests of all ages. The fete also had a kids’ zone to cater to very young children. 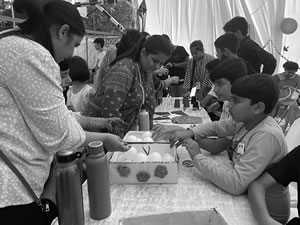 Shri R.K. Saboo, Chairman of the Kendra inaugurated the vibrant event.
The children and teachers received the guests in their stalls and left no stone unturned to give the visitors an enthralling experience. The students of the Special Cell of the school had organised a sale of handmade items such as gift envelopes, decorated diyas, etc. The event was open to the public and people attended in large numbers.

Bhavan Vidyalaya, Chandigarh received a delegation of 10 students and three educators from the Webb School, Knoxville, USA as part of the Students Exchange Programme organised in collaboration with Rotary International, Chandigarh. The American students spent three action-packed days living with host families of Bhavanites. They took part in numerous activities and absorbed the Indian culture and way of life. They had a truly immersive experience that they would probably cherish forever. It is notable that this is the school’s second visit to Bhavan’s Chandigarh. Students had earlier visited BVC during a cultural exchange programme organised in 2019.

By the time the delegation left for home, they had forged bonds of a lifetime; it was an overwhelming and heartfelt farewell, and both the hosts and guests were left with a reservoir of priceless memories and experiences. Student exchange programmes such as these go a long way in bringing the two countries closer and broadening the horizons of students by exposing them to various cultures from different corners of the world.

Bhavan’s Amritsar Kala Kendra staged ‘Sanjha Tubber’, a Punjabi drama on October 9, 2022 under the direction of Shri Avinash Mahendru and Director Principal Dr. Anita Bhalla. This play was written and directed by Mr. Sudesh Vinkal. It was presented in association with Alfaz Acting Academy.  The theme of the play was mutual love and cooperation as seen in a joint family.

Two students of Bhavan Vidyalaya Chandigarh, Ananya Sharma of Class 9 E and Anushka Sharma belonging to Batch of 2022, non-medical stream made the school proud as they made it to the National Fencing Team representing India in the Asian Youth Fencing Championship held in Kuwait.
This immense international-level achievement of the sisters is a culmination of their arduous practice of Fencing over the last year. The duo had proved their mettle in the Panchkula District Fencing Championship held earlier by winning the top awards. Ananya Sharma also won the Bronze Medal in the recently held U–17 Fencing Foil Event in the District and State Championships.